The Dems always make sure that whoever disagrees with them will be tagged as domestic terrorists, this includes Trump supporters.

Now a controversial fence has been erected around the Capital for what they said to “protect” members of the swamp from another fake “insurrection.”

The Hill reported about the decision to install the fence:

The fence around the Capitol building will go back up for President Biden’s State of the Union address this week. Capitol Police Chief Tom Manger announced that an inner-perimeter fence will be installed around the Capitol for Tuesday’s address.

He said the decision to resurrect the fence was made “Out of an abundance of caution, and in conjunction with the United States Secret Service.”

“Our Department’s mission to protect the United States Congress, the Capitol, and the legislative process remains unwavering,” Manger said in a statement. “In light of the upcoming State of the Union Address, and the possibility of demonstrations in the next couple of weeks, we have been working closely with our federal, state, and local law enforcement partners on a security plan to prevent any disruption to the important work of Congress.”

Up to 700 National Guard troops have also been called to help local law enforcement this is after the reports said that thousands of American truckers plan to arrive outside of DC on March 5th.

The fence will remain around the Capitol despite statements made by leaders of the People’s Convoy that they have no intention of coming near the White House when they arrive in the DC area to protest against COVID mandates.

The freshman lawmaker Congresswoman Lisa McLain (R-MI) stood in from of the installed fence. McLain is known for being an outspoken conservative; she explained that members of Congress are preparing for Biden’s SOTU speech. Before heading over to hear bumbling Biden speak, McClain had a few things she wanted to point out that she called “very ironic.”

McClain left a few things that she called “very ironic” before she headed over to hear bumbling Biden speaks:

Number one—a swift wind must have blown in from the Senate today because all of a sudden, COVID does not exist on the House floor. There are no mask requirements as of today. I wonder if we’re following the political science?

Number two—Behind me is this nice wall or fence that’s surrounding the Capitol. I’m confused. Why do we need a fence surrounding the people’s House to protect all of us when we leave ourselves exposed at the southern border?

The wall at the southern border was not completed. In fact, it was not finished, and it’s not going to be finished.

So, why does it make sense not to protect people at our southern border, but it makes sense to protect us? That doesn’t make any sense to me—at all.

So, I would ask you, Speaker Pelosi—Tear down this wall!”

Freshmen US Congresswoman Lauren Boehbert (R-CO), Marjorie Taylor Greene (R-GA), and Lisa McLain (R-MI) only proved that they are the truly brave leaders of Congress who are unafraid to take on the DC Swamp. 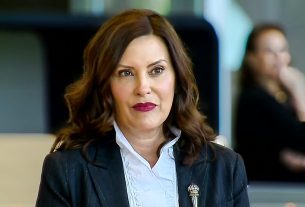 Senate Democrats Have Just Sent Out On A Witch Hunt For Bill Barr!